I realized as I was reading the paper the other morning that I had forgotten a very important point when I wrote this post about the top 10 tips for finding cheap airfare. I forgot to mention the fact that it is often much cheaper to fly out of an airport located on American soil compared to a Canadian one.

It was an article about this document presented to the Canadian Senate entitled: “The Future of Canadian Air Travel: Toll Booth or Spark Plug?” that triggered my post, by highlighting, among other things, that every year more and more Canadians fly out of airports located in the United States because of the availability of much cheaper tickets.

Just to give you an idea of how popular this practice has become, In 2011 a whopping 4.8 million Canadians flew out of the United States in order to enjoy advantageous rates. An increase of 15% compared to the previous year. Another interesting fact that illustrates just how popular this is among Canadians is that the Plattsburgh International Airport (located an hour south of Montreal) is nicknamed: “Montreal’s American Airport”. This probably has a little something to do with the fact that about 85% of its passengers are Canadian. 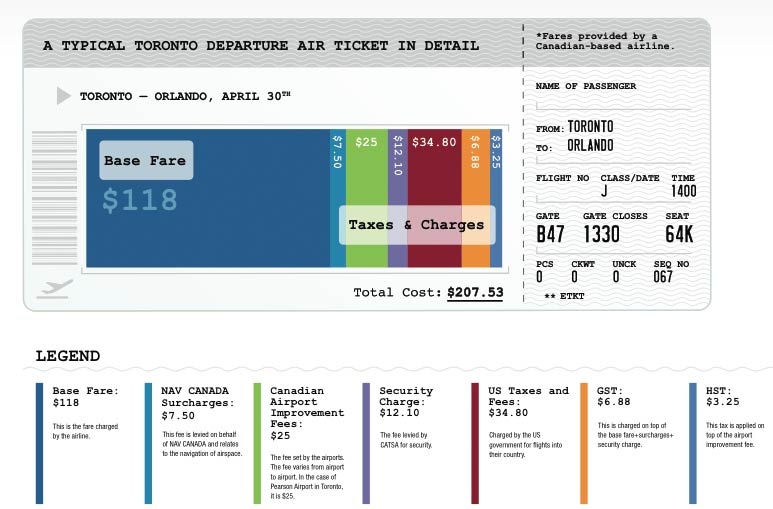 Why is it so Interesting to Cross the Border?

The average amount saved on the purchase of a round-trip flight is $425 (by flying out of the U.S. instead of Canada). This is mainly due to taxes, fees and other charges which amount to a 15% to 33% difference. Check out the interesting graph taken from the Canadian Senate document available above. It breaks down all the additional fees associated with flying out of Toronto and compares it with this graph, which was created for a comparable flight from an American airport. I’m sure you will also be amazed by all the extra fees we have to pay at Canadian airports.

Plus, it really isn’t that complicated for most Canadians to drive south of the border as 75% of Canadians live within a 90 minutes drive of the border.

So there you have it. If you want to save on flying, take your car to the nearest U.S airport, hop on a flight and save a bundle. Hopefully then Canadian flights will come down in price (so to compete). 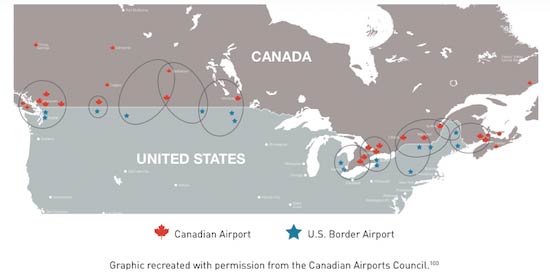