The Piggy Bank: Save Money Effortlessly

The Piggy Bank: Save Money Effortlessly

If you’re like me you’re always trying to figure out ways to put some extra money on the side in case of an emergency, or simply for the peace-of-mind it provides. Here’s my favourite way to do this: by using the piggy bank method. I know it’s probably one of the easiest and oldest tricks in the book, and it can be perceived as childish, but it works for me. It’s almost like tricking myself into saving.

Of course there are other methods to save money like contributing to an RRSP or a TFSA (which are also definitely recommended), but the great thing about my approach is that once you’ve chosen the rules for your method, and included it in your routine, you will end up saving considerable amounts without having to put much thought or effort into it. It’s so simple and efficient that it’s probably the #1 money saving tip given to children. And for people like me that find it difficult to save, sometimes the simplest solutions are the best. 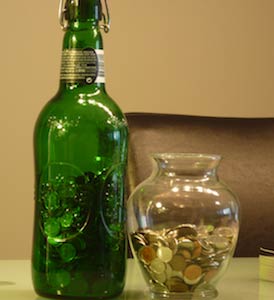 My routine is probably also one of the most common ones. It consists of emptying my pockets every time I switch pants or shorts and putting all the coins I’ve accumulated through the day in a jar. The next part is where my approach may differ from others: Once the small jar is full, I transfer its contents to my bigger container and it’s only when this one gets full that I count my money, prepare my money rolls and bring them to the bank.

The reason behind this is that I sometimes use what’s in the smaller jar to make small purchases like milk (I know some piggy banking purists would disagree with this, but I prefer doing it this way rather than using my cards for such small expenses). But once I transfer it to the bigger container I don’t touch it until it’s full.

Most people will likely only use one jar and empty it every month, once a year or when it’s full. And this is what’s great about the piggy bank method: you do what works best for you. It doesn’t have to be too much of a rigorous process for it to show results. And best of all the results and process are visible, you see it grow.

Make your piggy bank hard to reach so that you remove temptation from the equation (i.e. if it catches your eye every few minutes it might be tough to avoid spending it). Using your money jar for every ice cream craving you have (or whatever your vice is) pretty much defeats the purpose of having a piggy bank in the first place, but using it in moderation can potentially save you money in the long run. For me, it prevents me from wasting money on stuff I don’t really need, because if I leave my place to buy milk and I only have 6 bucks on me, I’ll only buy the milk and nothing else.

Take Piggy Banking to the Next Level

Do this by putting all your $5 bills (and only $5 bills) in a separate pocket/part of your wallet/purse or anywhere else you fancy and save them for the piggy bank. I personally don’t do this, but I have a friend who does and she is able to save money really rapidly by doing it. Enough that she can treat herself with a holiday, or at the very least a nice night-out every now and then. This method requires some extra effort and self control to do, but it racks up the cash quickly, and a big wad of $5 looks super impressive.

All right, it doesn’t matter if it’s for an emergency or as part of your money saving routine, but you’ve decided to cash-in all those coins. Let’s face it, this part can be a bit of a hassle. So here are the best ways to sort, count and roll your coins:
Use a machine available at the supermarket. Remember though that these take a small fee for providing this service (+/- 9%).
If you’re in luck, your bank or credit union will have a coin machine that will take care of sorting and counting the coins for you. But this is relatively rare and it is even rarer to find ones that do this for free. The Bank of Montreal offers the service in certain locations but you need to have a BMO account.
Another option is doing it yourself, by using a coin counting machine or a tray. These can get somewhat expensive though and may not be worth it if you don’t have to count coins too often. If you don’t mind purchasing a used one though, try having a look at craigslist.ca or kijiji.ca.
In the end, if you decide to go for the cheapest option: doing it yourself the old-school way, you may be interested in knowing that select supermarkets have some unwanted empty rolls that they can actually give to you for free if you ask them politely (this is a tip from a friend who used to work at a grocery store). To make coin counting more fun, try doing it with your spouse and kids. It doesn’t have to be a boring and lonely activity.

How about you? Do you use a piggy bank or a money jar? Do you have any ideas on how to make the coin sorting/counting/rolling efficient? To me it’s all about having something to look forward to. I find that it’s one of the most rewarding ways to really save some money and contribute to improving my financial status while keeping it fun.