5 Things to Consider When Choosing a Vehicle

5 Things to Consider When Choosing a Vehicle

Who wouldn’t like to save some bucks every week on their gas consumption? Except for Ben Stiller in Zoolander perhaps, I know I would! However, it can sometimes be rather tricky to know where to start on this quest.

There are so many urban legends and “facts” circulating about saving on gas costs and sure, we all have a few tricks up our sleeves, but how many of these actually work? Here’s a list of five elementary options worth considering if you’re looking to cut down on your gas consumption.

There are few things to consider before actually purchasing a car. The first two questions which need to come to mind are: do I really need a car and can I really afford a car? Taking into consideration that owning an automobile clearly is a luxury, especially if you live in the city, try thinking about other alternatives such as public transportation, a bike or even that much dreaded: walking. Renting a car a few weekends a year or signing up to a car-sharing coop often ends up being a cheaper alternative to owning a car.

Nevertheless, I’m the first to admit that owning a car can be quite practical and that it is sometimes inescapable. Therefore, if you’ve decided that you absolutely need a car, here a few options to consider:

Purchasing a diesel-powered vehicle will generally deliver 20% to 30% fuel economy compared to an equivalent size gasoline-powered vehicle. Also, diesel cars offer better torque than most gasoline engines; an advantageous asset to which we will come back later in the article. 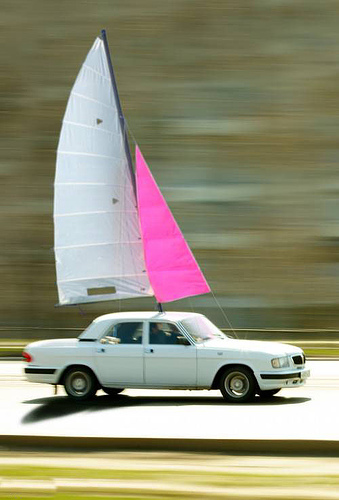 As with any other option, there are certain cons related to choosing a diesel engine. First of all, vehicles equipped with such engines tend to be more expensive than gasoline models (the extra cost should be covered within a few years though, thanks to the fuel economy).

Also, although diesel engines have significantly improved over the years, they still tend to be a bit noisier than their hybrid and gasoline powered counterparts. Finally, the biggest downside is related to emissions: while diesel cars are a lot cleaner than they used to be 20 to 30 years ago, they are still dirtier than other cars of equivalent size; spitting more particulates (particles of soot) as well as more oxides of nitrogen (NOx). It’s a trade-off though, as diesel cars emit less carbon dioxide (CO2) than gasoline automobiles.

Buy a hybrid car and you’ll see a difference at the pump instantly. Driving a hybrid means that you can expect to save up to 35% on gas consumption compared to the most fuel efficient gasoline-powered car. Plus, if you live in PEI or Quebec, tax incentives of $1,000 to $3,000 are offered to hybrid vehicle owners.

There are a few things to consider prior to purchasing this type of vehicle though. They do tend to be pricier than traditional cars powered with gasoline and the money you save at the pump won’t necessarily be enough to compensate for the vehicle’s initial cost. Hybrid car owners have also expressed some frustration over the difference between advertised fuel economy and what they actually end up getting. This being said, it is an associated reality with all types of vehicles as it all depends on the weather, terrain, condition of the vehicle (maintenance) and the user’s driving habits.

Buy a fuel-efficient gasoline-powered car, which are typically smaller and lighter vehicles than average. Not only do these tend to be cheaper at the time of purchase, but they also offer fuel economy comparable to some bigger hybrid and diesel powered automobiles. Car makers have been giving this market increased attention in the past years, releasing a bunch of fun and practical smaller vehicles.

Go for torque over horsepower and you should get better performance with any type of vehicle. This is because many engines produce maximum torque at a rarely used RPM. So, if you go for a vehicle that produces maximum torque in the range of 2200 to to 3000 RPM, you can be sure that it will produce sufficient power. In the end, a car that efficiently operates at lower RPM levels (such as diesel powered vehicles) is a savvier option. Check out the short article entitled “What does torque in a car do?” for a more thorough explanation of what torque does in a car. Although the article is slightly dated, it’s one of the best ones available online explaining this concept using terms that anyone can understand.

Consider switching to a manual transmission and you’re most likely to save on fuel consumption. This is because it will adapt to your driving style better than an automatic transmission; allowing you to practice a more fuel efficient shifting and decrease your all around fuel consumption by keeping the RPM as low as possible.

Of course, while these five tips don’t entirely cover the subject of saving on gas consumption, they are some of the most important factors to consider before actually purchasing a vehicle. We could also have gone into further detail regarding better driving habits, car maintenance, checking of gas prices as well as hypermileage techniques, but we’ll save these for another article.

Have I forgotten something? Let me know by leaving a comment and I’ll make sure to add your recommendation to the post.